We find ourselves living in an era where physical looks are taken very seriously. All over the media we notice commercials for hair, skin, teeth, and nail products; advertisements of make-up for every conceivable fold of facial skin; and the list goes on and on. The real question is: “Is it all worth it?” How much does physical beauty actually impact our lives, careers, relationships, happiness and peace in both the worlds?
Cosmetic surgeries have taken their toll on the youth like never before. I was especially shocked recently when I read about this young girl in the West who underwent a rib removal surgery and had six ribs removed to have a thinner waist along with a number of other surgeries to appear more beautiful. But rib removal to look pretty?!

We were created by our Lord in the most perfect of forms. He created each and every one of us beautiful, without any flaws. We need to understand that beauty is more than just appearance; it’s more about our personality, our nature and our dealings with the people around us. Our beauty lies in our level of confidence too, and confidence arises when there’s an appropriate amount of self-love, self-esteem and self-respect. Being content with our appearance and focusing on improving our character is the key to a happy life. It is true that we live in a society that portrays a certain type of beauty as being the ultimate aspect of beauty, but nobody said we have to agree and abide by those illogical concepts. By being comfortable with who we are, we will not only enjoy our life more, we will become everything that God has created us to be!

Everything that exists is created by Allah Who calls Himself: Al Khaliq (The Creator) and Al Musawwir (the One Who creates various forms and shapes). He created us and He is the Bestower of forms and He does not make any errors. His creation is as He wills, and He is the One Who formed and gave shape to all that exists. Allah says: “It is He who forms you in the wombs however He wills. There is no deity except Him, the Exalted in Might, the Wise.” (Al Qur’an, 3:6)
And He also says: “He formed you and perfected your forms and provided you with good things. That is Allah, your Lord; then blessed is Allah, Lord of the worlds.” (Al Qur’an 40:64) He has given everything its own form and distinct shape, even though His creation is so great and so varied, He has favored human beings and made them special and unique. Glorified and Exalted is He who says: 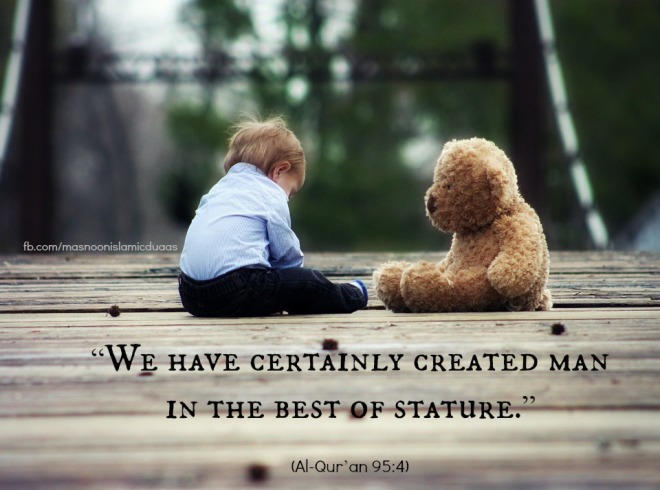 Along with being created as the most beautiful creature on earth, man has been given the power of reasoning and insight. This is what differentiates him from all other created beings — the power to choose and make sensible decisions. And removing parts from our perfectly created bodies to look beautiful does not come under ‘being sensible’…rather it’s harming oneself, gaining the anger of our Creator and hence, destroying our fate in this world and the Hereafter.

One should know and understand the fact that his body is an amanah, a trust from Allah, and so he is obligated to take care of it and honor it as it should be honored. Appearance and wealth are the criteria by which Shaytan misguides man. He leads him astray by making him think he is unworthy in the sight of everyone hence makes him take steps toward changing or distorting the creation of Allah. This can either be through sins like plucking eyebrows, getting tattooed, or by way of extreme cosmetic surgeries and the like. Allah says in the Qur’an: “Allah cursed him (Shaytan). And he [Shaytan] had said, “I will surely take from among Your servants a specific portion. And I will mislead them, and I will arouse in them (sinful) desires, and I will command them so they will slit the ears of cattle, and I will command them so they will change the creation of Allah.” And whoever takes Shaytan as an ally instead of Allah has certainly sustained a clear loss.” (Al Qur’an 4:118-119)

In Islam physical beauty is not considered to be a measure of virtue among people; rather the standard on which distinctions are made is taqwa (piety, fear of Allah). We will be judged by our Creator on what we do to draw closer to Him. The thing He appreciates about His servants is their effort in improving their faith, their characters and their deeds. The Messenger of Allah (peace be upon him) said, “Allah does not look at your figures, nor at your attire but He looks at your hearts (and deeds).” (Related by Muslim-1356)
Sheikh Ibn Uthaymeen (may Allah have mercy on him) says in his explanation of this Hadith: “This Hadith points to what Allah says in the verse: ‘O mankind! surely We have created you of a male and a female, and made you tribes and families that you may know each other; verily the most honored of you in the sight of Allah is (he who is) the most righteous of you; surely Allah is Knowing, Aware (Al-Qur’an 49:13)
Allah does not look at the figures of His servants, if they are big or small, healthy or sick, nor at their looks if they are beautiful or not. He does not look at their lineage, whether it is prestigious or not, nor does He look at their wealth, or any of these factors at all. The only connection between Allah and His servants is through Taqwa (righteousness), so whoever has more Taqwa of Allah is closer and more honorable in the sight of Allah. So do not be proud of your wealth, your beauty and body, your children, your mansions or cars.”

As believers we have to understand that this worldly life is temporary and there will come a day when physical beauty will carry no value to us. We must worry over our state in the Hereafter. Allah says: “(Some) faces, that Day, will be bright — Laughing, rejoicing at good news. And (other) faces, that Day, will have upon them dust. Blackness will cover them.” (Al Qur’an 80:38-41)
So let’s try our best to be content and be grateful to Al-Musawwir, Who shaped us by His ultimate wisdom. If Shaytan tempts us to feel insecure about any of our facial or body features, let’s remember the Day of Judgment when nothing but our deeds will matter.