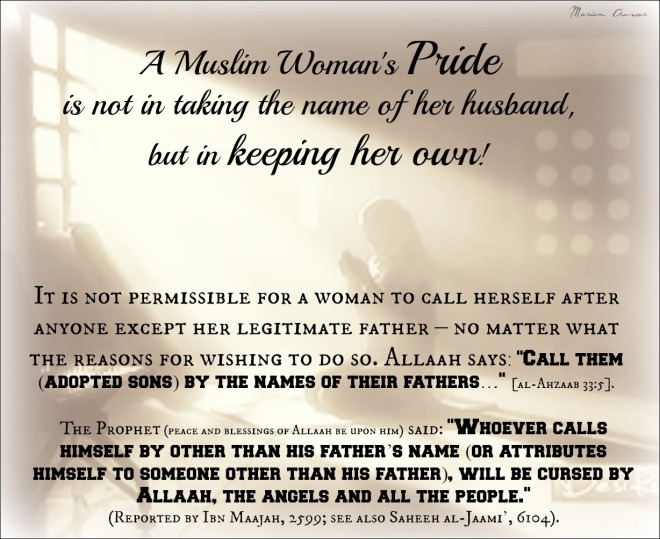 I read on your website the questions and answers regarding the issue of women changing their surname upon marriage. My question is, can a husband force his wife to change her surname against her will? And what can the wife do if her husband and his family are pressurizing her to change her surname in the name of legal issues?

Praise be to Allaah.It is not permissible for a woman to take her husband’s name or his family name because that is attributing oneself to someone other than one’s father, and imitating the kuffaar from whom this custom was adopted.

Al-Bukhaari (3508) and Muslim (61) narrated from Abu Dharr (may Allaah be pleased with him) that he heard the Prophet (peace and blessings of Allaah be upon him) say: “Any man who knowingly attributes himself to someone other than his father is guilty of kufr. Whoever claims to belong to a people when he has nothing to do with them, let him take his place in Hell.”

“when he has nothing to do with them” means, when he has no lineage among them, as is highlighted in some reports.

Based on that, the husband has no right to force his wife to do that, and if he forces her to do it she should not obey him, because it is obedience to a created being which involves disobedience to the Creator. So she should persist in her refusal and explain to him that it is haraam, and look for Islamically acceptable means of establishing her rights from a legal point of view.

In our eagerness to copy the West, we Muslims have adopted many of their practices which have no basis in the Sharee’ah. And among them is the practice of a woman changing her family name to that of her husband after she gets married.

The fact is that Islam does not require woman to change her name at marriage and there is nothing in the Sunnah to indicate that a woman should take her husband’s name after she gets married.

Actually, the Ulama tell us that this is an innovated practice that is not approved of in Islaam. Now, I know some people will say…“ Oh, come on…What is the big deal?!!”

So read on and you will know what I mean…

Did you ever think why they didn’t do that?

That is because it is Allaah’s order to keep your father’s name as an indication of your lineage. “Call them (adopted sons) by (the names of) their fathers, that is more just with Allaah…” [al-Ahzaab 33:5].

And the Prophet (Sal Allaahu Alaiyhi wa Sallam) said: “Whoever calls himself by other than his father’s name, will be cursed by Allaah, the angels and all the people.” (Ibn Maajah -Saheeh by al-Albaani).

And he (Sal Allaahu Alaiyhi wa Sallam) also said: “Whoever knowingly claims to belong to anyone other than his father, Paradise will be denied him.” (Ahmad, al-Bukhaari, Muslim).

Now some might argue….“But the woman is not claiming that her father is someone else. She is just honoring her husband or she doesn’t mean it that way. She just wants to belong to her husband out of love for him.”

To those people I say….

And if it was a matter of expressing love for the husband, no relationship between a husband and wife on the face of this earth was better than the relationship between the Prophet(Sal Allaahu Alaiyhi wa Sallam) and his wives. And yet none of the Mothers of the Believers expressed their love for the Prophet (Sal Allaahu Alaiyhi wa Sallam) by changing their last names.

It doesn’t make any sense.

The last name is an indication of the father of the person and represents the person’s lineage.

Shaykh Bakr Abu Zayd said: “This is one of the beauties of Sharee’ah, because calling a person by his father’s name is more appropriate for knowing who is who and telling people apart…..” (Tasmiyat al-Mawlood, 30, 31).

Originally, the woman is ‘the Daughter of So and so’, and NOT ‘the wife of So and so’. Since there is no blood relationship between the husband and wife, how can she take his last name as if she is part of the same lineage?

And surely, she is not claiming that he is her father!!!!

In addition to this, there are rulings attached to the woman being named after her father, which have to do with her inheritance, spending and who is her mahram, etc. Taking her husband’s last name overlooks all that.

Also, if you think about it, the husband is named after his own father, and what does she have to do with the lineage of her husband’s father? This goes against common sense and true facts.

Besides, the husband has nothing that makes him better than his wife’s father. So why should she give up her father’s name and take her husband’s last name??

And why does the man get to keep his father’s name and not the woman??!!

It just doesn’t make any sense.

“A woman changing her family name to that of her husband after she gets married is Haraam and is not allowed in Sharee’ah, because it is not permissible for anyone to claim to belong to anyone other than his or her father…… And Allaah knows best.” (www.islamqa.com)

Not only is it so in this world, but, we will also be called by our father‘s name in the Hereafter as well. The Prophet (Sal Allaahu Alaiyhi wa Sallam) said:

“On the Day of Resurrection, each betrayer will have a banner raised beside him, and it will be said, this is the betrayer of So and so, the son of So and so.” (Bukhaari, Muslim).

So, all you single females out there, don’t be in such a hurry to change your maiden name after you get married. And those of you who have already done that, it is never too late. Take back your maiden name and reclaim your identity. It is part of the Sharee’ah.