The thought of losing one’s mind due to old-age, illness or an accident is most certainly a worrying one to say the least. The gift of sanity, especially for a Muslim who consciously seeks to invest in every single second in preparation for the Hereafter, is a particularly precious one.

With that said, ‘AbdulMalik Ibn ‘Umair said,
كان يقال أن أبقى الناس عقولا قراء القرآن
“It used to be said, ‘The people who are protected most in respect to their minds are the reciters of the Qur’an’”

In another narration,
أنقى الناس عقولا قراء القرآن
“The purest of people in terms of their minds are the reciters of the Qur’an.”

Imam Al-Qurtubi said,
من قرأ القرآن مُتّع بعقله وإن بلغ مائة
“Whoever recites the Qur’an (i.e. frequently) will enjoy soundness in his mind, even if he hits the age of 100.”

Extremely Beautiful Advice – by Shaykh Muhammad Mukhtar Ash-Shinqitee
Question: I am a young practicing Muslim but I don’t feel the sweetness of faith, and I always bring myself to account and perform good actions such as being kind to my parents but I always feel depressed even though I pray and I sit in the circles of knowledge and in the gatherings of memorizing Qur’an and I am aware that the problem is from myself but I don’t know where this problem lies, which is always bringing me distress.
Answer: Firstly and before anything else – sadness, anxiety and depression are from Shaytaan. And secondly, don’t make judgement over your Lord, for there is none more kind and noble than Allah, and He is more Merciful to you then you are to your own self. 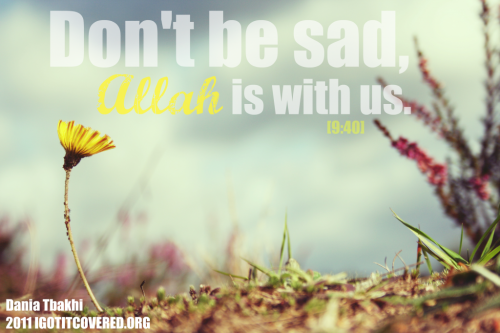 If you are living in His obedience and you have a good opinion of Allah and hold fast to this fact; that sadness is from Shaytaan, and you don’t pay attention to these feelings, then surely the plots of Shaytaan will soon vanish from you. However if you submit to these feelings, you decide for yourself that you are overcome with grief! How many people wake up every morning, healthy in body, safe and secure in their dwelling place, surrounded by well-being, yet despite this they say: ‘I am sad, I am depressed, I am overwhelmed!’, all of this is because he led himself to believe in it wholeheartedly. And no one assumes a bad opinion about Allah except that he is doomed. Allah has sent instruction from above the seven heavens not to be sad, and He also advised His Prophet (peace be upon him) that it is Shaytaan who places these feelings and notions, so He said:

Secret counsels are from Shaytaan, in order to cause grief to the believers [58:10]

Do not pay attention to this thing called sadness, and what are you grievous over? Are you grievous over something concerning your religion? Then know that Allah can mend all deficiencies. And if you are grievous over something from the worldly affairs, from losing a father or mother, or some wealth or children, then with Allah is better recompense from every type of loss. And you will not find a true slave of Allah overcome with depression as long as his heart is only attached to Allah.

What are you grieving over?, if your heart was for Allah then He would fill your heart with trust and confidence. Therefore it is not befitting of the Muslim to expose himself to that which causes grief, for if he does this the he has helped the Shaytaan against his own self.

And so the Prophet (peace be upon him) would seek refuge from sadness and he advised Abu Umamah when he saw him sitting in the Masjid, so he (peace be upon him) said, ‘O Abu Umamah’ May my parents be sacrificed for him (the Prophet), for he was most compassionate towards the people, for he saw this companion in the masjid at a time, other than the time for Salat.

Look at this noble Prophet! Allah honored him and made him the Seal of the Messengers yet he would still look out for his companions … he said: ‘O Abu Umamah, what has caused you to be in the Masjid now?’, so he replied: O Messenger of Allah, sadness that has overwhelmed me, and debts that have crippled me! So look what the Prophet of Mercy (peace be upon him) said to him: Should I not inform you of some words, if you say them, Allah will dispel your worries and pay your debt?, he said: Certainly O Messenger of Allah! He said: Say ”O Allah I seek refuge in You from anxiety and sadness and I seek refuge in You from inability and laziness …

He said: ‘I said these words‘ – so how good the speaker and how good is what he said, those companions who when they heard anything from the Book of Allah they believed in it and said those words with hearts that were alive and brimming with faith, they didn’t say, ‘By Allah my debts are too much!‘ can these words benefit?!, or ‘My debt is in the millions!’ Yes! By Allah if you had the entire world (as a debt), Allah would pay it off as long as the Prophet (peace be upon him) related that it would be paid. You say: ‘I’m sad and grieved! Can such words benefit me?’, Yes! that is when you believe and submit not when you become feeble and give up.

The problem is that we have supplications for morning and evening and you ask Allah to give you protection from sadness, from grief, from inability and laziness but this will only benefit when you do so with your heart, not just your tongue. So you seek His Aid, realizing that these words are from Revelation and that they are from the Lord of the Worlds and there is no one more true to His Promise then Allah, then you will be sure He is able to relieve you of your problem.

And I know a man who had been afflicted with the misery of debt so I mentioned this hadith to him so he returned to me after a short time, and his debts were in the millions! He said to me, ”When you told me the hadith Shaytaan overwhelmed me and I thought it is impossible that such a debt could be resolved with words but after saying the du’a, Allah resolved the matter for me from where I didn’t expect!” He said: ”Initially I thought it was not possible – then I knew my doubt was from Shaytaan. Allah sent His Messenger to say these words to us then He doesn’t fulfill His Promise?! Rather I will say these words!”, He said to me: ”In just 3 days my problem was solved!” And his debt was in the millions, some people may only wait for a day!

But the matter is one of Faith and perhaps Allah may delay the response for months, due to a reason and wisdom, or perhaps a problem may linger for years so that you meet Him with higher ranks and rewards due to your affliction. Because He is Ever-Merciful to the believer for no sadness or trial faces a believer except that He rewards him for that! So you should believe firmly that this grief will dissipate.

Likewise I advise you to look deeply at your condition. Sometimes one is afflicted with a trial because of some injustice. So perhaps you wronged your wife, or wronged your children, or your neighbor or your colleague at work by way of lies or deceit so you didn’t fear Allah as regards to the people so you are afflicted with some matter from Allah. So check yourself as regards the rights of Allah, and then the rights of His servants and resort to amending the matter, and look deeply and Allah will inspire you to find this defect.

And I recall one time whilst I was young – and I say this by way of admonition only – my father assigned me to take care of  some work in the fields, however, I was the afflicted with an ailment in my stomach and this was during my studies whilst I had nothing else and so I became astonished at the sickness in my stomach. And one of the best doctors in Madinah, a friend of my father, he didn’t know what the problem was or how to treat it so I remained like this for some time. So once I prayed asking Allah to relieve me of the illness and that if there was anything, to show me my mistake and by Allah, by whom there is no God but Him, it was a day in Ramadan and my fathers lesson was after Dhuhr, and I left for the fields.In these fields there were cattle with their food and crops, however the workers were not feeding them from the vegetation. They would take paper from bags of cement and feed these animals from that paper, so they would throw the paper in front of the animals as food. Allah is witness to what I say, and I am in the Mosque of His Messenger, that day as I left for the fields, it was as if I was being led towards those animals until I stood in front of them and as I did, it was as if they were looking at me shouting!

So I saw and noticed these papers in front of them so I called the workers despite that it was Ramadan and became very angry at the situation. Then I ordered that the animals be given from the vegetation that was present, but all this (affliction) [was] because this was a responsibility that was given to me to take care of.

So I swear by Allah, every day from then, the sickness left me gradually until it had gone completely.

So if you see that a matter has afflicted you, search out for the matter, look out for your companions, your neighbor, your work colleagues, perhaps a person you wronged, or didn’t give his due. As for if you seem afflicted by this without any reason then this is just from Shaytaan, and upon you is to hold firm to the remembrance of Allah, morning and evening.

So if you say these supplications, Allah will surely benefit you thereby, as long as you say them with your heart and you ponder over them.