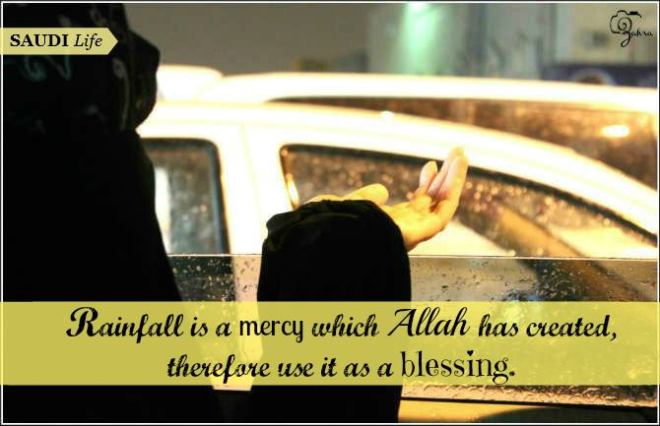 An unusual sound penetrated my train of thought as I sat studying at my desk. I looked up pensively from my book and a few moments passed before I realised that what I was hearing was the sound of pouring rain. A sound so common back in my hometown, Cape Town, was now so foreign to me in the desert city of Madinah.

I rushed out onto the balcony to admire the rainfall. As I stood, witnessing Allah’s answer to the prayers of the community, a strange sight caught my eye down below. A man, instead of running for cover, walked calmly to and into his building. He reappeared shortly carrying a chair. Still in a state of composure, he placed the chair out in the pouring rain and just sat down! He appeared to be enjoying the sensation of the raindrops falling on his skin. I was intrigued.

Back home, many people become grumpy at the first sign of rain or run frantically from it when it catches them unawares. I just kept staring. I then made an intention to find out more about what I had witnessed and soon discovered that spending time in the rain was a practice of the Prophet (peace be upon him) and His Companions (may Allah honour them), based on these findings:

It is Sunnah (A practice of the Prophet (peace be upon him) to stand in the rain and to expose a portion of your body to it.

And Haakim in his book Al-Mustadrak narrates this hadith with the following words: “When the rain came down from the heavens He (The Prophet May peace be upon him) used to remove his garment from his back until the rain fell on it (his back).”

The scholars have taken proof from this hadith that it is Sunnah (recommended) to expose your body and clothing to the falling rain. Out of happiness that Allah is sending down his blessing and moreover rejoicing that its falling down on us.

And the meaning of the phrase: “Because it (the rainfall) has just come from the Exalted Lord.” is mentioned in the explanation of Sahih Muslim of Imaam Nawawiy by saying: That the rainfall is a mercy which Allah has just created, therefore use it as a blessing.

Imaam Ashafi’ee mentions in his book Al-Umm: It is narrated by Ibn Abbaas (may Allah be pleased with him): That the rain fell from the heavens so he told his servant to bring out his mattress and saddle so that the rain may fall on it. Abu Jawzaa’ then asked Ibn Abbas: Why are you doing that, may Allah have mercy on you? He (Ibn Abbas) then said: Do you not read the book of Allah:

“And we have sent down from the heavens water that is blessed” [Surah 50, Verse 9]

Therefore I would like the blessing to fall (incur) on it.

Scholars of jurisprudence have mention the following regarding standing in the rain:

1. The Sunnah of exposing oneself to the rain can be obtained by unveiling any portion of one’s body no matter how small the portion may be like one’s head or arms.

2. One should not expose one’s Awrah.

3. It is recommended by some scholars to take Wudu (ablution) and Ghusl (wash) from the rainfall. And they based their deduction on the following Hadith: It is narrated from the Prophet (may peace be upon him) that when stream used to flow he (Prophet) would say: “Leave with us to that which Allah has made pure so that we may purify ourselves from it and praise Allah most exalted.”

Imaam Al bayhaqee states that this is a narration from Umar (may Allah honour him) and not from the Prophet (may peace be upon him).